The Populism Specialist Group purports to facilitate a critical dialogue about contemporary democratic politics, and populism’s complex role within that. It particularly invites the participation and contribution of international scholars from countries and regions where populism has marked political culture, shaping political frontiers and stimulating antithetical discursive articulations. 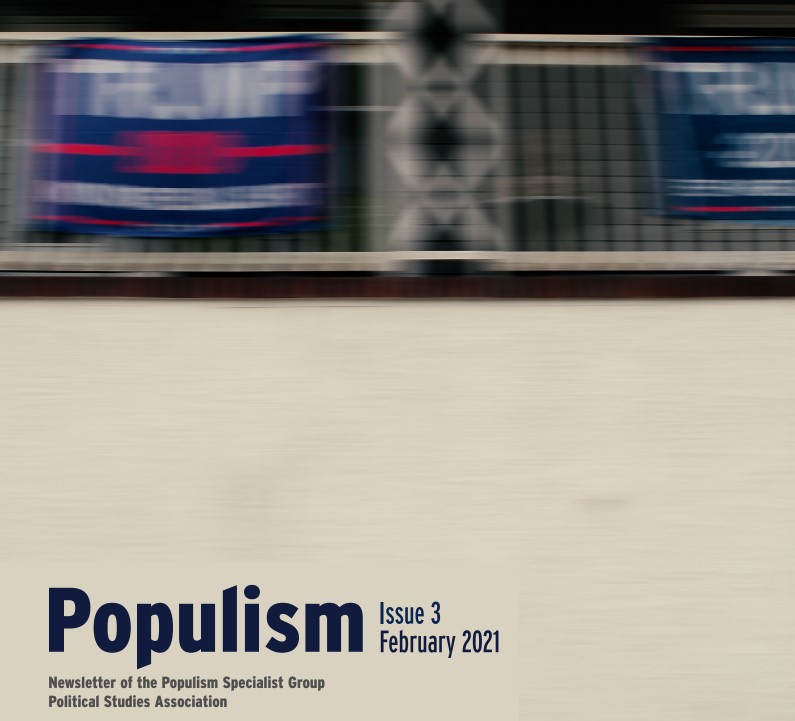 Posted on September 6, 2018 By psapopulism

The Populism Specialist Group of the PSA invites paper proposals on the following themes:

‘Populism in power’ seems to be a rather counterintuitive notion to the extent that public wisdom as well as most academic research are premised on the idea that populism can only be effective in opposition. Indeed, populism is often understood as a political strategy or rhetorical style that may be potentially rewarding while in opposition, while certainly challenging, if not harmful, when in government. In addition, few populist parties have formed governments, especially within the European context. Yet, the cases of many Latin American governments, of the current SYRIZA coalition government in Greece, of the situation in Poland and Hungary, as well as of the new Italian government, to mention just a few indicative examples, invite one to urgently reconsider this rather misleading idea. We invite paper proposals dealing with any aspect of the populist record in power (including economic and social policy, rule of law and polarization, foreign policy, ideology and discourse, etc.) from different political, geographical and cultural contexts. Comparative and historical perspectives as well as case studies will be particularly welcome.

Does populism have a history and, if so, what is it? This is a fertile question to enhance our understanding of the explosive phenomenon of populism. To date, much has been written about historical instances of populism, but accounts that attempt to knit together each of these case studies to produce a theory of populism’s history are thin on the ground. This panel invites considerations from across the disciplines to address the question of populism’s history, especially inviting historians, political scientists, political theorists and philosophers to launch this debate.

The issue of Brexit poses numerous questions for the study of populism. In the first place, it elides the distinction between populisms in opposition and in power: Brexit arguably emerged from a paradoxical coalition between a nationalist, right-wing populism with Nigel Farage as its figurehead, alongside key figures within the British government. In the second place, Brexit is playing out before our very eyes with the key players very much emanating from the highest echelons of the establishment or elite, who are leading figures within the government looking to implement Brexit itself. What does Brexit say about populism? And, inversely, what does populism say about Brexit? How does the distinction between populism in opposition and populism in power hold up through the example of Brexit? Is it really populism that has produced Brexit, or is it something else? We invite paper proposals grappling with these questions and more.

Recently, there has been an increased focus on the role of masculinity in populist movements and parties. Some would argue that populism relies on a male leader, looking to Donald Trump and Victor Orbán, among others, as prime example of the workings of populism. However, leaders such as Marine Le Pen in France and Pia Kjaersgaard in Denmark complicate this narrative, turning the focus from male leaders to masculinity. This panel engages with the question of which role masculinity, sexism and chauvinism plays in the construction of populist movements and parties. The panel engages with, but is not limited to, the following questions: To what extent are populist movements and parties reliant on strong leadership exhibiting the common markers of the alpha-male? What role does masculinity play for the far-Right? What role does masculinity play in left-wing populism? How can feminist and critical scholarship help us better understand populism? The panel welcomes contributions across a range of empirical and theoretical perspectives.

The Populism and Communism Specialist Groups of the PSA invite paper proposals on the following theme:

For almost two decades now but especially since the onset of the global financial crisis, a conviction emerged in the literature on left radicalism in Europe, that there exists a populist radical left, which manifests itself both in terms of social movements as well as parties. Its key features are said to be chiefly those of evoking the sovereign people as an organic unity in contradistinction to the self-interested and alienated elites. This panel aims at interrogating three aspects of the relationship between the contemporary European radical left and populism as a political discourse: a) to what extent has a populist discourse emerged within Europe’s radical left? Is it a new phenomenon and how is it communicated in relation to other political orientations? b) In which ways does populism’s articulation with a socialist strategy unify or divide the European radical left, either producing broader popular alliances or instigating conflict among activists and partisans? c) How does the ideology of left radicalism absorb populist rhetorical schemas and in turn what influence do the latter have on the articulation of programmatic positions and principles? In its attempt to integrate scholarly research on the left and on populism, this panel welcomes papers, which deal with one or more of the above three issues of communication, strategy and ideology as part of a theoretical, empirical or historical investigation.

Applicants will be notified whether they have been included in the PSG’s panel proposals ahead of the final (non-negotiable) PSA deadline (22 October 2018).